A Rundown of CSS3 Units and their uses

I’ve been learning a bit more about CSS3 units over the past few days and it’s rather surprising how the web design community seems to have totally ignored their possible uses. The new CSS3 units specification is currently being refined, although the things I mention here are unlikely to change.

Data last updated April 2012
The table below contains data on support of CSS3 units specification, as well as units that are complimentary to them.

* the nightly builds have a few errors, but they basically work 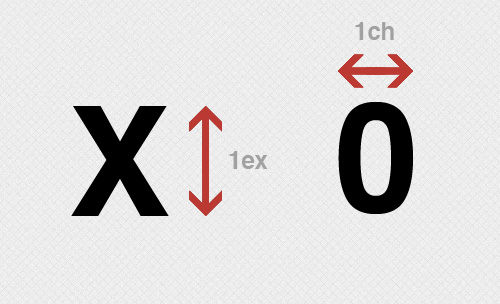 We’re all familiar with px as a font size, but with CSS3 comes the addition of a few new units. You’ve probably heard of the em (1em is equal to the original font-size of the element, 1.1em is 10% bigger) unit, and perhaps some of you have heard of ex (height of the x character).

CSS3 introduces two new font related units. These are ch, which is the width of the font in question’s zero (0) character. The other is rem which is defined as ‘equal to the computed value of ‘font-size’ on the root element’, although the specification is a bit short on details.

The viewport is the width and height of the viewable portion of the screen, inside the browser.

There are 3 new viewport related units, which will be incredibly useful for many things. These are vh, vw and vmin.

What it all means

This has numerous applications, such as one page layouts, background patterns, and I’m sure a lot more.

Something new to the whole field of CSS units is the ability in CSS3 to change units in a more fluid manner. These follow functional notation, and are calc(), cycle(), counter() and attr().

How do they work?

As you might expect, calc() allows you to make calculations. For example, lets say you want an element to be the width of the viewport, minus 5 pixels. You could do that like this to accomplish that:

Pretty neat, right? The next function is called cycle(), which literally cycles through elements.

This is used in nested items. Lets assume you have a list, and want each nested set to have a different bullet point. Using cycle this becomes very easy.

Effectively, you end up with a pattern like this:

This leads us on to the attr() function, which can grab attributes from the element in question. Lets say you are using the data- HTML5 attribute to attach information to a div via Javascript or some other means. So you have a set of div’s like this:

Using the attr() function we can then use these values straight in our CSS:

This opens up a lot of possibilities and really increases the intimacy between CSS and HTML, allowing us to connect the two in ways we have never really been able to before.

The final element is counter(). Counters allow you to add numbers incrementally, and then put them in your CSS. So first of all you have to reset the counter, then you can increase it, and implement it using counter(). Here’s an example:

The list of new units in CSS3 goes on and on, however most don’t have an applicable function just yet, or the specification doesn’t detail exactly what uses they may have. Since the specification is still being refined this is to be expected, and most of these will certainly prove useful in the future.

A Look at :target and How to Make a Tabbed Interface with Just CSS3

CSS3: The Multi Column Layout and How it Will Change Web Design