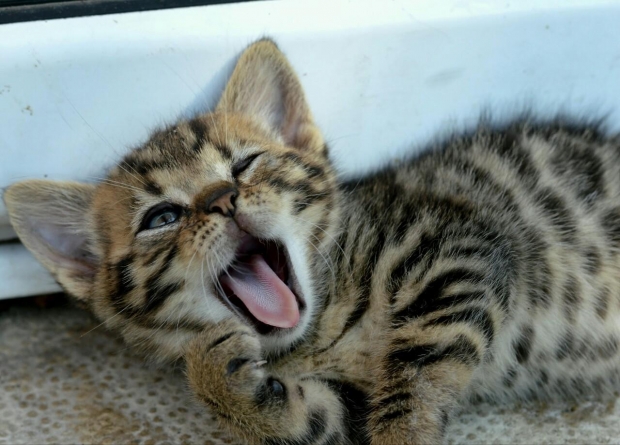 One ingenious hacker has come up with a way to satisfy his cat’s primal instincts by developing a custom-built machine that releases a portion of cat food when the cat delivers balls equipped with an electronic chip.

The Daily Mail is reporting that Benjamin Millam has developed radio-frequency identification (RFID) enabled balls and a custom feeding machine in order to allow his cat to engage its natural hunting instincts. The pet owner hides the balls around the house and, upon training, the cat gets to satisfy its primal urge of hunting.

Milliam engineered his invention using an automatic cat feeder, hacked with “an Arduino microcontroller and simple RFID chips to automate the process.”

Not only is Milliam a genius developer, he’s also apparently  proficient in animal training and irony. Not only was he able to build the one-of-a-kind prototype, he was also able to train his cat, named Monkey, to use it.

“Training cats can be tricky, but Mr Millam outlines a technique called clicker training which involves rewarding positive behaviour with a treat and marking it with a clicker,” the article said.

“Using this technique, Millam managed to train his cat… Monkey, to firstly pick up a radio-frequency identification (RFID) enabled ball, and secondly deliver it to a target.”

Milliams represents just another way being skilled in tech is a great way to solve life’s problems.

“Ben Millams hack has allowed his pet cat Monkey to unleash its inner hunter, while at the same time offering a high tech solution to the problem of feeding the cat,
the article said.